Sridevi in her own words: My Page 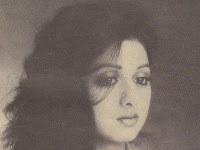 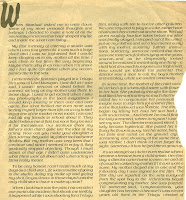 Sridevi in her own words, From Stardust's 'My Page' section.
All images by Gautam Rajadhyaksha.


Sridevi, "When Stardust asked me to write down some of my most personal thoughts and feelings, I decided to make a note of all the interesting incidents that have shaped my life and made me what I am today...

My first memory of entering a studio was when I was four years old. It was such a huge place and I was so frightened that I would keep clinging on to my mother all the time. I was close to her from the very beginning. Maybe that’s why even now when I’m shooting I feel quite comforted when she accompanies me to the sets.

I remember the first role I played in a Telugu film was of Lord Murugan. I just did as I was told. I wasn’t nervous or afraid before the camera as long as my mother was there. In those days, I used to get excited when I saw my photographs in the local magazines. I would keep looking at them over and over again. But what thrilled me even more was seeing myself larger than life, on a city hoarding at one of the market cross-roads. I ran and told all my friends in school about it. They didn’t believe me at first, but soon they too saw it for themselves. Our relatives (from my father’s side) didn’t quite like the idea of my acting. ‘How can you make your daughter a film actress’, they said. My father too had some doubts. But my mother was very keen that I continue and since I seemed to enjoy it, they gradually stopped objecting. Though I must admit, at that age, I didn’t quite understand what films were all about and what acting in films really meant.

To be very honest, I can’t recall much of my days as a child-star. Life was a routine of going to the studio, doing my make-up and giving my shot. Do you know in those days I was the only child-star to have a make-up man?

When I look back into the past, I can recollect one particular incident that shook me terribly. It happened while I was shooting for a Telugu film, along with ten to twelve other children. We were required to play in a lake, rather have a bath and then come out on the shore. We had given roughly four-five takes before the shot was finally okayed. I stepped out of the water, put on my clothes and sat a few metres away with my mother, awaiting further instructions. Suddenly, someone noticed that there was one more set of clothes lying on the grass, unworn... and as he desperately looked around he realized it meant only one thing - a child had drowned! Everyone was frightened. How would we inform his parents? The director sent a man to call the boy’s mother immediately, while we waited anxiously.

In some time, the mother of the child came all decked up in a beautiful saree, with flowers in her hair. She probably thought the director had liked her son’s acting so much that he called her to congratulate her personally, maybe even to sign him for another film. The scene that followed was horrible. The director began by telling her how her son had met with an accident... And before he could finish, the lady screamed, ‘Where is my son? I want to see my son.’ The director remained silent. The lady became hysterical. She pulled her hair, flung the flowers away, tore her saree, banged her fists and rolled on the ground; crying, screaming and shouting at the same time. It was terrible. I don’t think I’d ever forget that sight. Somehow it has helped me to grow up.

It’s so strange but I didn’t even realize when I became a heroine from a child-artiste. One fine day, a director came home to meet me and all of a sudden asked my mother if I’d ever worn a saree. My mother draped me in one and the following day I was signed for the film. The first day we reported on the sets everyone from the spot boy to the technicians began congratulating my mother. She was puzzled. Till someone said, ‘Congratulations, your daughter has become a heroine’! I was eleven years old then! In the Telugu version of Anurag. I was to play the role that Moushmi played. The only thing funny was that the little boy who I had to mother was my age! And both of us had a lot of fun playing and running around the studio, in between shots. The days he didn’t report for shooting I’d feel very lonely and bored with nothing to do.

One person I truly hero-worshiped was my father. I think I was more fond of my father than my mother. I missed him a lot. Maybe being a lawyer he was busy with his court cases. One day I pestered him to take me along to court. I wanted to see what it would be like. My, what an argumentator he was! Loud and aggressive, hitting out at his opponent, who was actually a good friend of the family. It was nearly an hour and a half later that the case came to an end. And then what do I see? My father walking towards his opponent, putting an arm around his shoulders, laughing with him, like they were the best of friends. I couldn’t quite believe what I saw. How could a man be such a loving father at home and behave so differently outside?

Of course, now I can understand, because I am in a similar situation today. My glamorous image is quite different from the real-life person I am at home. In fact no director has ever projected me even remotely close to my true self in any of my pictures. I’ve always been given chaalu, carefree, fun loving kind of roles when in reality I’m quite the opposite – a very quiet and sober girl. But then why should I show this other side of myself to the outside world? They like me as they see me, they’re only interested in viewing that part of my personality. Though I agree that sometimes bits and pieces of a star’s lifestyle are read with some interest, the people begin to identify themselves with their favourite idol – and that’s the reason why I do disclose some of my likes and dislikes. Like I said before, I like strawberry ice-creams and milk shakes and love to watch video films in my free time.

Honestly, I’m quite a boring person. I know it. But I don’t want to change either. I’m happy the way I am, my family is happy with me, so why should I bother about anyone else' opinion? I’m here to work. And not for anything else. I don’t even mix about with my co-stars except for the customary ‘Hello, how are you?’.

Talking about my career, would you believe that I started off with flops! Not one, or two, but three! But I have never struggled to get films, I just kept working on the few films I had signed and slowly but surely, some of my films began doing well.

Now I’ve reached a stage where I am not threatened by any other star. Frankly I’ve got just a few films on hand, lesser than the other actresses, but I wanted it that way. I only wish I could remain like this forever. Had it not been for my family, I would have never reached this position in the industry. And it’s not only my parents, but also my sister Srilata who has helped me a lot. She has been with me from the very beginning. She has become so much a part of my life that now she’s become exactly like me. We almost think alike. So much so that she doesn’t really have an identity of her own.

I remember some three years ago when I had met with an accident and had fractured my leg, I had to keep the plaster and bandages for six whole months. But the day the bandages were to be removed my mother was afraid, so was my aunt and me too since we didn’t know what a raw wound would be like. Except for Srilata. She said she’d be with me. And she was. She held my hand, stood by me and comforted me.

Since we are so close to each other, I think Srilata and I will get married together. At least that is what my father wants. I prefer an arranged marriage. After all it isn’t always necessary to love somebody before you marry him, you can always love him after marriage too. Maybe in a few years time we will settle down.