Sridevi in on Tamil Game Reality Show: Neengalum Vellalam Oru Kodi: Who Wants to be a Millionaire? in Chennai: With host Prakash Raaj 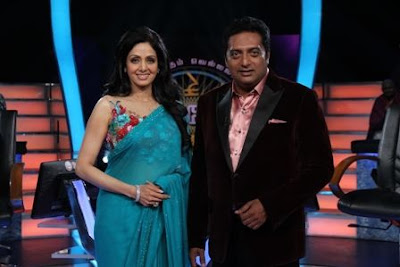 Sridevi on the sets of Neengalum Vellalam Oru Kodi, the Tamil version of Who Wants to be a Millionaire?

It was amazing to watch Sridevi on the show. The comfort Sridevi has while speaking in Tamil reflects how beautifully, eloquently, confidently she spoke. Unlike any other show - especially the volley of interviews she did while promoting English Vinglish - she was so relaxed and so funny - and entirely charming.
I hand it to actor Prakash Raaj for helping Sridevi ease into the conversation, have such insightful comments, such inquisitive and respectful questions to the Queen of Indian cinema.
The clips are wonderful - must watch here. [No longer available]
If we ever write a book, we'd first learn Tamil and then interview the Goddess as she's the most frank, honest, witty and confident in Tamil (or in her mother-tongue Telugu). Far from the monosyllables she usually answers in English or Hindi.
She has such untapped knowledge about every film industry she has worked in, esp all the legends she worked with - before turning into one herself! Just incredible. "Sridevi is an encyclopedia of acting:, as Vidya Balan has famously said. With 50 years in the industry, she is by far an institution in one exquisite frame.
Posted by Rama at April 27, 2013