Aangilam Vaangilam (2012): English Vinglish is made in Tamil too: Superstar Ajith joins Sridevi instead of Amitabh Bachchan for the southern belt 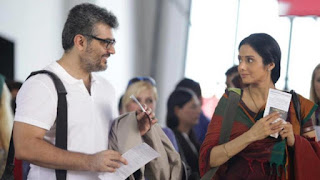 A great stock of reviews of Aangilam Vaangilam - the Tamil-dubbed version of English Vinglish from various sites. 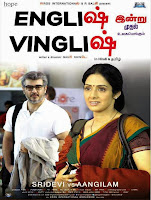 Sridevi's last Tamil movie was Naan Adimai Illai, way back in 1986. After more than two and a half decades, the sensational actress of India is back with multilingual movie English Vinglish.

The movie is a simple story of a middle-class housewife Shashi (Sridevi), who is not being treated well by her family, as she's not well-versed in the English language. In our country, we often see the English speaking men looking down at the non-English speakers. And director Gauri Shinde has pointed out this through her characters in English Vinglish.

Shashi's businessman husband and her two kids, does not respect her in the family. To come out from this insecurity and the tag of restricted-to-cooking woman, she decides to learn the language and joins an English-speaking centre to learn the language. There is also a good amount of funny interactions between her fellow students like a French chef, a Pakistani cab driver, a Mexican nanny, etc. The journey of her mastering the language and getting the deserved respect form the crux of the story. The story is told with a lot of wisecracks. For example: When a visa officer in Chennai asks her, "How will you manage in the US without knowing English," an Indian co-worker pokes his nose and replies, "Like you manage in this country without knowing Tamil." Likewise, there are many more witty remarks along the way.

The movie brings a lot real-life moments in the story. The fans of Ajith Kumar, who wait on their toes for his entry, have enough reason to blow whistles, as his welcome dialogue delivery is wonderful. "What is the purpose of your visit?" asks the visa authority and he responds, "I want to spend some dollars to help the American economy recover." The same role has been portrayed by Amitabh Bachchan in the Hindi version.

English Vinglish has a natural story, and Sridevi is the strength of the movie. One could not have expected a better role for her comeback movie than this. Her strong screen-presence and mind blowing performance are the highlights of the film. French actor Mehdi Nebbou, Adil Hussain, Navika Kotia, Priya Anand have played their part well. Last but not least, Ajith Kumar's cameo will leave you wanting for more of Thala.

Verdict: Must watch for Sridevi's fans. 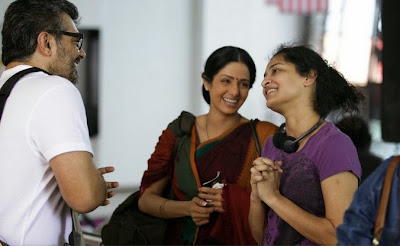 Cinema is an entertaining medium that is meant to take the audience through a narrative format within a stipulated time and hence has to engross them, transport them to another world and put the ideas of the film maker into their head and then let them go and think about it or revel in it. Debutante Gauri Shinde just does all that is said above with English Vinglish. And Ms Shinde, take a bow for having delivered a product which is a celebration of life and all things good and positive!

And what a comeback for the most beautiful and talented artist of our times! Sridevi’s acumen should be lauded for selecting such a script for her return to the silver screen where she actually belongs.

EV is an endearing tale of a home maker who gives her heart and soul to her family but seeks just a little respect  that she truly deserves. That said, Shinde does not over dramatize things or bring in a sympathy factor. We have a protagonist in Sridevi who knows her priorities well but at the same time relents only for the overall happiness of her family. Nevertheless where it matters, she sure does raise and with graceful authoritative aplomb.

Needless to say, its Sridevi’s show all the way as she dominates the screen effortlessly! The beautiful face and the gamut of emotions that play around those gorgeous eyes are a joie de vivre experience. Sridevi’s magic begins the moment she turns her face to the camera and keeps the audience in her grasp for a long time. The cute little jive she does for her son, the exhilaration that she expresses when she is called an entrepreneur, the dignified manner in which she handles Mehdi Nebbou who loves her, the hurt she feels when her husband and daughter ridicule her, the anguish in an eat-out shop in America on not knowing the language are all just samples of what a power house performer that we have missed all these years.

Designer Sabyasachi should be appreciated here for dressing Sridevi in the most apt sarees that highlight her looks and character.

What instantly draws the viewer to this adorable tale of finding self-worth is its simplicity and earnest moments that bring out a few smiles here, a few touching moments there and an overall good feeling that stays with you long after you leave the hall.

Plaudits are due to Gauri Shinde for a taut and engaging screenplay that is devoid of any unnecessary or contrived sequences. She makes you root for her protagonist, smile with her, feel for her and be a part of her life through out. Her characters are real and identifiable.

Shinde is ably supported by her crew both on screen and off screen. Adil Hussain, the Ishquiya artist as Sridevi’s  husband, Mehdi Nebbou as the French chef who loves her, Priya Anand as her niece have all essayed their roles perfectly. The cute little son of hers is so natural and adorable that he lifts the spirits up whenever he appears. 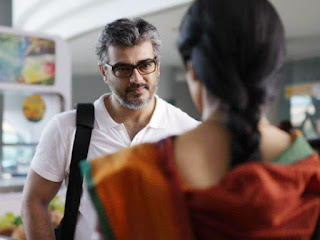 Ajith’s cameo is highly enjoyable and he gets to mouth lines which are relevant and significant. As he says, it is good to learn a language but not knowing is not bad. It’s an impactful three minutes indeed!

Music Director Amit Trivedi transports you to a sound zone that is perfect for the film but the Tamil lyrics of Ammachi do not gel well though. The English learning sequences might remind viewers about Mind Your Language series but that cannot be helped as when it is about learning English, it is bound to have participants from varied nationalities.


On the whole English Vinglish is a delectably mounted tale of a woman by a woman who delivers it right the very first time in a charming fashion.

From Behind Woods. com http://behindwoods.com/tamil-movie-reviews/reviews-2/oct-12-01/english-vinglish-review-02.html