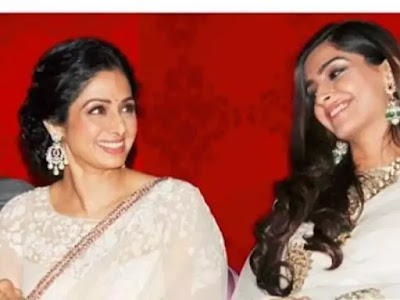 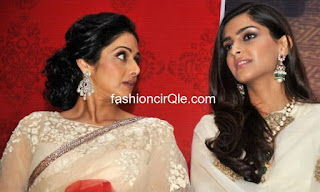 
Sridevi with Sonam Kapoor back in May 2012 looking ultra glamorous and gorgeous in their Indian designer attire.

Both were at the opening of Park Hyatt in the city of Hyderabad. The launch saw many film personalities attend but all eyes were on Sridevi who looked gorgeous in a embroidered lace, white and red dipped saree designed by Manish Malhotra. Sonam Kapoor opted for an Anamika Khanna outfit.

Familiar to the city having shot several films in Hyderabad, Sridevi looked like she was having a great time and comfortable enough to speak to several media outlets, all inquiring about her highly anticipated return to films. At the time, summer of 2012, Sri was still keeping mum about what was developing behind the scenes. 😉

Update: I understand Sonam Kapoor is a polarizing figure for her off-the-cuff remarks, but having worked with her and her team a few years ago, and having met her briefly when she was in Hong Kong, for the record, Sonam was lovely, charming, kind to the team (we did a cover shoot for Prestige Hong Kong magazine and all reports from the crew were, they loved her!), a wonderful interview and chat and to top it all, she loved Sridevi and Sridevi loved Sonam. We really don't give a damn what you trolls think!