Who would have won Best Actress at Filmfare 1986? 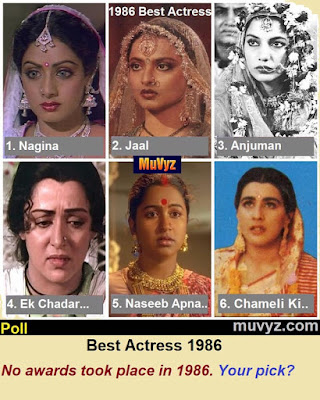 In 1986 and 1987 there was no Filmfare Award show held and some mega-films, performances where not rewarded with the recognition they deserved by industry peers and critics.

This was a time when awards were somewhat given by meritocracy not addled with the pressure of TRP ratings, advertisers and there wasn't a glut of other similar award shows.

Every media outlet now has its own version of awards and they seem so mundane... When you hear that Shahrukh Khan has 25 awards or some such absurd number (in random BS categories like Entertainer of the Year, Face of the Year, Couple of the Year, Scene of the Year... I mean, each passing new year they are making up categories to award, in particular, the Khan-trifecta, the only way to guarantee their attendance and viewership ratings). BTW even the actors bemoan the categories and recognise what they are!

For most Sridevi fans in particular, Sridevi not getting awards for two of her most iconic films, Nagina and Mr India, is a matter of personal affront! Blind fanatics - sometimes we are that we admit- forget that there were other memorable performances in 86 and 87 too.

Would Sridevi have won that year? She was competing with legends such as Rekha, Hema Malni, Shabana Azmi. If you see Chameli ke Shaadi, Amrita Singh is... INCREDIBLE! Her comic timing and natural performance stays with you long after.

Sridevi's Nagina performance is... a glittering gem in her crown, and a box-office blockbuster to boot. However, at the time, awards were not telecast, critics (who were not always kind to Sridevi in the early years in particular in Mumbai) gave them to parallel cinema darlings like Shabana Azmi and Smita Patel (there was a year with Shabana Azmi had a record five nominations all to herself!).

So tho it seems obvious now, in hindsight, back then, it was an unpredictable gamble as to who would win or wouldn't. Don't forget a film like Sholay won ONE award - every other category it was nominated for left empty handed. So who know what Nagina's fate could have been during awards night?