Inquilaab: More Drama Behind the Screen than in Front! 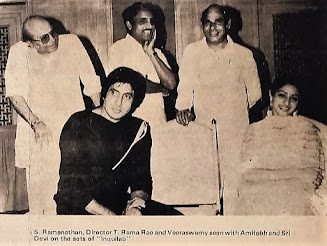 Behind the scenes drama, petty politics, professional harakiri, rivalry, back stabbing, Chinese whispers, Machiavellian maneuvers have existed in Bollywood for decades. We are just more aware of it now thanks to overshare on social media by those actively involved in or the behind the curtains of mystifying Bollywood. Voices from the margins who guise themselves and speak freely online with no repercussions are now taking centre-stage in media. And this is problematic on many levels.
In the not so distant past, rivalries were aired out in public. For example, look at the schemes that went on behind the scenes of Inquilaab; more drama backstage than what happened on screen! Snippets from the tabloids back in 1984;
"Panic struck on Novemver 11 1983, Aaj Ka MLA was launched with a 10 day shooting spell. the director Dasari Narayana Rao approached Dilip Kumar for the film but he declined. He also approached Amitabh for a another film,but he also declined.
At a party at Srinagar, before a crowd of over a 100 people, Narayana Rao proclaimed he would make a bigger hit than Avtaar with Rajesh Khanna. The film was a remake of Eedukonadalu. It dealt with a chief minister and the Congress government tried to ban it before the elections that brought NTR into power. But not many knew about Aaj Ka MLA before hand.
The launch and mahurat of the film came as a shock, specifically to T Rama Rao who was a rival of director Dasari Narayana Rao. On the same day the producer of Inquilaab, A. Veeraswamy, made a frantic phone call to Amitabh. He was angry and yelling,stammering over his words. Amitabh asked him to calm down and come down to Delhi to meet him and speak about the matter. 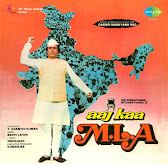 A.Veeraswamy,T.Rama Rao, S.Ramananthan, Poornachandra Rao all boarded an urgent flight to meet Amitabh in Delhi. Upon landing ,A.Veeraswamy told Amitabh that Dasari Narayana Rao launched Aaj Ka MLA which was a remake of Telugu hit MLA Eedukonadalu. It was a plan to sabotage Inquilaab. Amitabh was said to have laughed it off not taking it seriously. When Poornachandra Rao explained further how bad the situation was, Amitabh was shaken. Aaj Ka MLA was actually planned to be launched in January 1984. When there was a slight delay in Inquilaab due to Amitabh severely injuring his left hand during Diwali celebrations. Rajesh Khanna contacted Dasari Narayana Rao. He wanted to lift the entire second half of Inquilaab and add it to Aaj Ka MLA. The producer T.Kranthi,Dasari Narayana Rao and Rajesh Khanna had plans to shoot and complete the film before Inquilaab could release. They were all aware Inquilaab would take another 8 months due to Amitabh canceling Tinnu Anand and Prakash Mehra's films in November, December, January.
Amitabh was taken back by the situation. But a doubt lingered in his mind. He questioned the credibility of the situation. T.Rama Rao made a phone call to writer Dr. Rahi Masoom Raza. He was the dialogue writer for Inquilaab and Aaj Ka MLA. Masoom Raza spoke to Amitabh and confirmed the entire story. Amitabh was disturbed but could understand why Dasari Narayana Rao would join hands with Rajesh Khanna. Narayana Rao had approached Amitabh for another film which Amitabh declined. He then approached Amitabh again for Aaj Ka MLA. Amitabh declined the offer in favor for A.Veeraswamy's Inquilaab. Amitabh realized how serious the situation was and decided to immediately shoot Inquilaab against doctors orders. 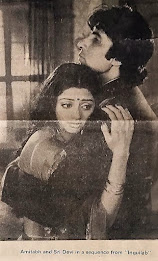 Amitabh would need constant medical attention on the sets and the bandages could not be removed no matter what. So T.Rama Rao decided Amitabh's character would constantly have one hand in his pocket at all times. Amitabh called Prakash Mehra and explained the situation to him. Prakash Mehra gave Amitabh the go ahead to shoot Inquilaab before Sharaabi. He would not be angry about this. So just 10 days after Aaj Ka MLA was launched on November 21, Amitabh flew to Madras and shot for Inquilaab nonstop. The situation was such that the Mumbai actors were offered three times more money in cash if they could give immediate shooting dates and complete their scenes fast.
Prakash Mehra blasted Rajesh Khanna in the print. Mehra called Khanna petty for playing this dirty game with Amitabh. Amitabh's hand was all black from being burnt. He needed to go to USA for skin grafting. Now he could not do that immediately due to Rajesh Khanna trying to sabotage Inquilaab. Rajesh Khanna got word about Inquilaab's new progress and promised immediate dates for the film.
The mahurat for Inquilaab was held on October 26 ,1983, and the film hit cinemas in record time, with one nonstop shooting schedule and released on 25 January 1984!
But for unknown reasons Aaj Ka MLA got postponed slightly making it release after Inquilaab on 2 March 1984.
Despite completing a silver jubilee however, the film was considered an above average earner. Gradually, it became a gold mine for the distributor on re-release. Even in the mid 90s, the movie celebrated 50 days stupendous run at Majestic theater in Calcutta." 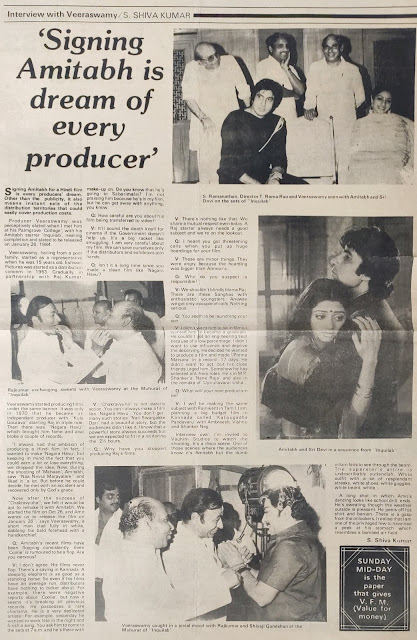