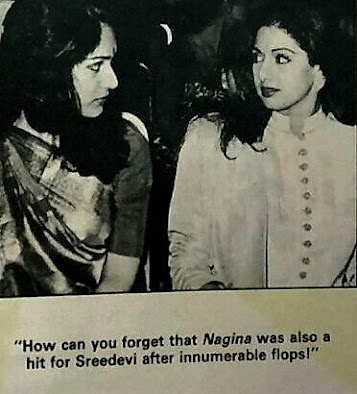 Excerpt from an interview with Meenakshi Sheshadiri regarding Sridevi and their alleged rivalry. Born the same year as Sridevi, these 80s contemporary actresses worked together in one film - Joshilay - and when Sridevi's career skyrocketed, two-heroine projects were not for Sridevi. In fact, she'd often do a double role instead.

But in the early and mid-80s, Sridevi and Meenakshi Sheshadiri - a noted, studied dancer and former Miss India - were pitted against each other in the media. For.. no reason other than selling tabloids.

They said she was second only to Sreedevi. But Dimple [Kapadia] wiped her out into near oblivion with talent plus looks. Meenakshi has explanations for both.

No more guarded, wary and Ms Professional, Meenakshi insists she's way above and won't be a strip-tease artiste like a Kimi or a Sonam to remain there!

Q: You make disparaging remarks about senior actresses like Sreedevi - "She makes faces at the camera - that's not acting". And Dimple - "She's survived on the the strength of public sympathy." Statements like these throw light on your insecurities. Why can't you gracefully acknowledge that these actresses have gone way beyond you?

Meenakshi Sheshadiri: To start with, I've never made any disparaging remarks about anybody. The comments you are referring to are concocted and fabricated! That's just not the way I speak. Besides, I'm not such a petty person to go running down somebody else. Why should I be insecure or frustrated by anybody? Agreed, that I may not have had the success of a Nagina, but to say that's the end of my career is absolutely ridiculous! How can you forget that Nagina was also a hit for Sreedevi after innumerable flops. I'm also doing heroine-oriented roles which are selling very well. Every film that does well is not solely because of the actress. And let's face one thing - no one individual can make a box-office blockbuster, except Amitabh Bachchan.

* Images of Meenakshi Sheshadiri with Sridevi over the years here. 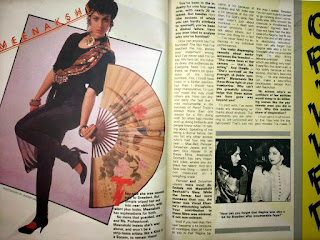 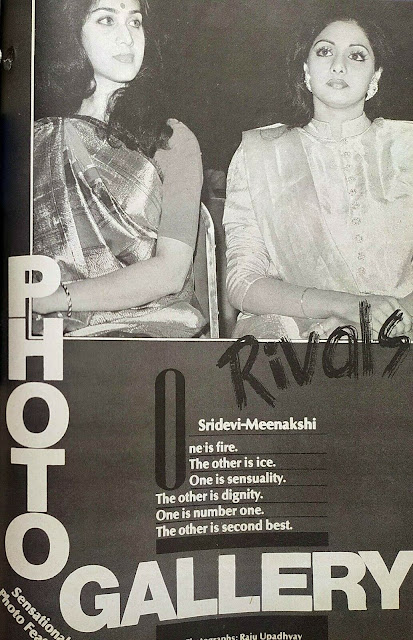