And the Award Goes to... Sridevi

Mellow with that hint of fierceness, haughty with the mist of tenderness, that’s Benazir, who easily outshines Mehndi, that too is Sridevi, bubbly, a la Lamhe. She looks as magnificent as Bachchan on the horseback and her erect back, her rhythmic bounce show her defiance and arrogance. When Bachchan fulfills her challenge, her insolence towards him changes to admiration. Her thrill and the prospect of marrying such a valourous man makes her drop her reserve for a moment. But in a minute, she deliberately gathers her customary poise and walks elegantly to receive him.

At the time of parting from him after a short blissful month, she beautifully conveys the control that the character exercises – the trembling hands, the quivering lips and the break in the voice – when the easiest thing would be break down.


But it’s in the climax that she is absolutely superb. The slightly unhinged anguished woman is oblivious of the threat to her life. She comes alive when she senses her beloved’s presence. The aged Benazir wobbles towards her long-lost beloved for a reunion after 18 unbearable years of separation, amidst a holocaust of crossfire.


She touches with amazement the once beautiful black beard of her Badshah which has now turned hoary. The tenderness in her eyes speaks volumes about her pain of waiting, the wilting of her youth. And finally, the tigress rides once again as she preys upon her tormentor in the game of bushkashi. 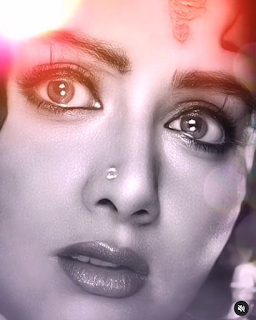