TBT to 1987: War of the roses: Jaya Prada and Sridevi in Majaal


Stardust: Dear Sridevi, Your rivalry with Jaya Prada, is really too much. Despite her efforts to make up with you, you still resent her and continue to hate her. I believe that you stretched your ego clashes so far that you sulked and fought for top billing for the film Majaal in which you are a co-star with Jaya Prada. Isn't it foolish and downright petty for a top star like you to stoop so low and fuel a cold war?
Jivraj Verma. Poona
Sridevi: "Yes, I'm aware of the cold war between Jaya Prada and me, because people have been going on and on about it. The world has been right in thinking that Jaya Prada and I are not friends, because I am in the industry to work and not to socialise. Once the camera is switched off, I acknowledge no other presences, but mine. But please, I don't hate her, because if I were to sit hating a person it would mean attaching too much importance and Jaya Prada is certainly not worth it. Contrary to public opinion, Sridevi doesn't have to fight for top billing, she gets it, because the audience knows that she deserveds higher billing than Jaya Prada."
March 1987, Stardust 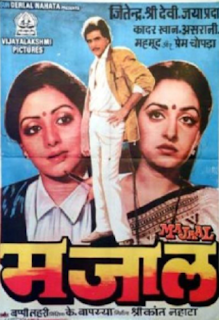 The film was produced by Jaya Prada's husband and there was a dance off between the two divas (TBH a better one in Maqsad) that was pretty on the nose about how the leading ladies felt about the other. The actresses were 24-25, spirited in their tiffs and taunts to the other (which we've studiously recorded in the archives!).
Posted by Rama at November 24, 2022