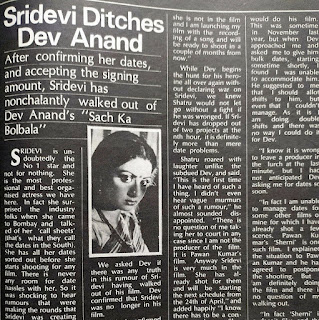 This screaming headline from 1986: "After confirming her dates, and accepting the signing amount, Sridevi has nonchalantly walked out of Dev Anand's Sach ka Bolbala"

Well, you can't be in the film industry for 50 years and not rub a few people the wrong way. After an initial meeting (that famously did not go well as recorded by the magazines back then), Sridevi chose never to work with cine-legend Dev Anand.

She didn't have the opportunity to work with the yester-year hero and quiet frankly, was no loss to her resplendent career or his tarnished filmography.

When the film started production in 1986 (and eventually released in 1989 and was declared a flop), Dev Anand had lost his touch and went on to make a historic succession of flop and increasingly awful films. In fact, if you look at the last 22 films he made, each film was so appalling, it barely registered long enough for critics to even file a review - I mean, have you ever heard of let alone seen Aman ke Farishtey, Chargesheet, Mr Prime Momister, Love at Times Square, Censor, Main Solah Baras Ki??

His movies did so badly at the box-office, they created another category for his movies; disaster! From the King of Romance and style in black and white movies, to the King of Flops; the fall of Navketan films was Grecian in its tragedy. From making classics like Guide and Jewel Thief, to circling the drain in a tsunami of disasters, stars who once chased Dev Anand for an autograph famously hid when he came around.

For the sake of nostalgia and the irrefutable charm of a cine-icon Dev Anand, many A-listers could not say no to him and he cajoled stars like Hema Malini, Aamir Khan, Jackie Shroff, Tina Munim and several others to work in his God-awful movies.

You can be a wonderful person and be a terrible film maker (and vice versa!).

Dev Anand blissfully was a forgiving sort and never looked back, always ahead. When he met Sridevi on stage two decades later, charmed her once again. And she stood by the courage of her conviction and said no to his films again.