Post marriage and children, Sridevi shied away from the limelight to the comfort of her home. However, the grapevine has been rife with rumours about the actress's alleged comeback with Mr India 2. And the fact that the actress has shed six kilos only validates this.

Recently, the actress was spotted at a social gathering, where she looked stunningly slim in a western-wear. When we contacted Sridevi's trainer Shereveer, he confirmed. "Yes, Sridevi is definitely much slimmer these days. She is very sincere when it comes to working out. She follows a strict diet regime and never compromises on her health. For example, if I ask her to drink one glass of fresh lime juice for the whole day, she will do so happily without complaining," says Shereveer. "I don't think she was excessively overweight at any point. But after her pregnancy, she had put on weight, something she is working on. Now she has a toned body. I think she will look great on screen if she decides to make a comeback," he adds. 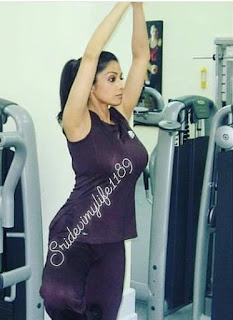 The actress did free-hand exercises and weights to tone up. Known to be a stickler for perfection, she followed her regime diligently. "I have seen how she manages her time. Most people skip exercise for their other commitments. But not Sridevi, although she was not acting in films, she works out religiously. She follows diet-charts and maintains her weight. She is one of those obedient students," says Shereveer.

"She is graceful and I am happy that she is looking great. We have all admired her as an actress and it will be great if she decides to make a comeback," he says.

Incidentally, Shereveer started training Sridevi while Anil Kapoor was working in Pukar. "I have been Anil's personal trainer and I am still with him. It was during the shooting of Pukar that I got introduced to her," he says.

Allegedly, the actress is expected to make a comeback in Nikhil Advani's Mr India 2, a sequel produced by brother-in-law Anil Kapoor.