Just Me: Sridevi in her own words 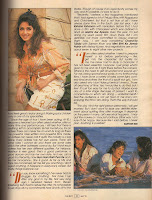 May 1994, Sridevi pens some of her thoughts for Cine Blitz magazine. All pics by Gautam Rajadhyaksha.

Sridevi takes a look at herself… And presents herself in her own words.

Sridevi, “Eleven years ago I came to Bombay, acted in Himmatwala and I was surprised that it became a big hit. Only because prior to this film, I had done Solva Sawan which had flopped very badly. But in spite of this fact, I didn’t have to struggle to reach the top. Quite honestly, since the beginning, I have never done anything special. Nor have I plotted and planned. So it really feels good to have made it!”

“At last I have also started feeling at home in Bombay, ever since I moved into my own apartment at Green Acres in Versova. I am no longer tense because I don’t have to stay in a hotel and depend on room service. Nor do I have to live like a gypsy. Finally, I can have ghar ka khana [home cooked food] and relax. Though I’ve not met my neighbors, there are the children, they wait to see me leave for my shooting, and they’re very cute.”

“A while ago I fell ill because I was shooting day and night. Due to this, I lost about eight kilos and it was reported that I went through a special ayurvedic course to become slim. That’s not true at all! I’ve never taken any medicines as such, to change my physical appearance. You see, even the way I look is not planned! I don’t need to go on crash diets because I tend to put on and lose weight very easily. I think it must have something to do with my system. In a few weeks time I can look absolutely different. When I was complimented on the way I looked I decided to keep away from milkshakes, chocolates, ice creams, etc. But yes, I do miss all this. I suppose this is the only alternative because I never exercise! It’s only when I am not shooting that I go on an eating binge!”

“Another thing that I love doing is watching films. After pack-up, as soon as I’m home, I head for my LD (laser disc player). I get so involved watching films that I can hardly take my eyes off the screen. Nowadays my latest craze is to watch films made on animals. Of course I also love watching horror films of the Omen kind. Though usually I am a sound sleeper, occasionally I get dreams. Generally it’s about snakes being all around me. I’ve noticed that whenever I have cold or am not feeling well, I tend to dream about snakes.”

“What I hate the most is being left alone. Loneliness scares me, so I have to have a family member along with me at times. I love it when they’re around because then we scream, chat, watch movies, and generally have a lot of fun. At times, cooking my own food feels great. I enjoy dong it. Making spicy chicken curry is one of my specialties.”

“Since the age of four I have been acting. At the age of ten, I became a heroine! I am often asked whether, after so many films and performances, I still feel if there is anything left to accomplish. But let me tell you, for an actress there can never be an end! As long as there are powerful roles written and powerful films made, an actress can never call it quits! The industry is a big place.

Every actress has her own place. There are some roles I cannot do and there are some roles which other actress cannot do. But I think each actress has her own different qualities. For instance, Madhuri is very good. She is a good performer, a good dancer and has her own style. And yes, Juhi is good too. Recently, I saw Hum Hain Rahi Pyar Ke and I like her innocence… She is good. As far as hits and flops are concerned, let me tell you one thing, I don’t regret anything. It happens in everyone’s career. But finally, things balance out.”

“Do you know something? I've never had to struggle for anything. Nor have I run after any goal in my life. Not very long ago, I received feelers from Steven Spielberg, but I had to refuse the offer. It’s not possible to just drop all my commitments here and fly off to the States. Though of course if an opportunity comes my way and it’s possible, I’d love to do it.”

“Recently, I believe, a few magazines mentioned that I had signed a lot of Telugu films, with Nagarjuna and Chiranjeevi. But that is not true at all! I have always done films in the South. Like last year, I did Kshana Kshanam with Venkatesh. Before that, I had done a film with Chiranjeevi which was dubbed in Hindi as Aadmi Aur Apsara. Even this year, I’m just doing my usual yearly film down there. But I am definitely not more committed to Telugu cinema! I am busy completing Chand Ka Tukda with Salman Khan and Meri Biwi Ka Jawab Nahin with Akshay Kumar. And negotiations are on for about seven to eight other new projects.”

“I am often asked whether I need to prepare rnyself a lot before performing - like, get into the character. But luckily for me, I’ve never had to study a character. It has not been essential. I suppose, I just grasp what is given to me and do it right there before the camera. Where is the need to get all worried and wound up? For me, being spontaneous works. In my forthcoming films, I have done a variety of roles, some light comedy kind, and others like that of a spoilt rich girl… I am also asked why I don’t take up ‘serious’ cinema… Those off-beat kind of films. Yes, I would like to do that, but I feel that it’s just too easy for me to do that. Maybe some day, at a later stage. Because, at present, I want to concentrate on what I am doing – entertainment! I feel, the audience is not yet tired of me and I am enjoying the films I am doing. That’s the way it should be.”

“The day I find the right person personally, I will get married. But I don’t want to issue any definite statement about quitting films after marriage. It depends on the person I marry. Let’s see what happens. I may quit the movies or I may just continue. Either way, I am sure I‘ll be happy. Because like I said before, I never plan. Anything is possible!”

Email ThisBlogThis!Share to TwitterShare to FacebookShare to Pinterest
Labels: 1994, All in the Family, Cine Blitz, feature, Gautam Rajadhyaksha, in her own words, jacket, May 1994, Quote, Sridevi, suit, suit and tie, suitable, tie