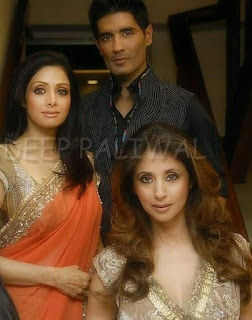 Manish Malhotra famously designed and dressed these two leading ladies of Judaai, Sridevi and Urmila. Not only for the film but for several occasions.

This portrait was shot during Sridevi's hiatus, a rare picture of the grand divas of Bollywood with Bollywood's fav designer. Although the ladies didn't become best of friends during the production of the film, they had a polite and respectable approach while filming. Urmila had said she was a fan of the actress and appreciated that the legend was an introvert and quiet on set. As working colleagues there was so riff between either - despite what the media made up or concluded.