Shekhar Kapur: Without Sridevi, there can never be another Mr.India" 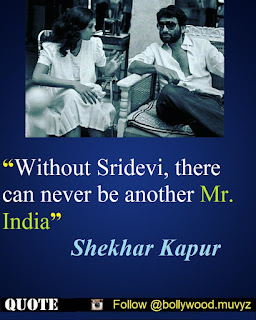 Something we've been saying for ages now, without Sridevi there can be no sequel to Mr.India - despite it being one of the most requested films for a part two.

The film's director just confirmed that there are no plans for Mr India 2 since Sridevi's untimely demise - and certainly a heartbroken Boney Kapoor has no plans to make a film without his beloved wife either.

Email ThisBlogThis!Share to TwitterShare to FacebookShare to Pinterest
Labels: Behind The Scenes, Mr India 2, On the Set, Shekhar Kapoor, Sridevi