On June 2, 1996, Sridevi and Boney Kapoor got married. The rarest images from that day. In pictures, Sridevi a, resplendent bride in red. with Boney Kapoor.

Attending guests were only the immediate family; on the far right, Anil Kapoor and Sunita Kapoor (Boney's younger brother and his wife). On the left, Sridevi's uncle and aunt - well, that's how she addressed them. They aren't actual blood relatives of Sri.

You can read up on the Breaking News about Sridevi's controversial marriage to Boney Kapoor from features in the past here. 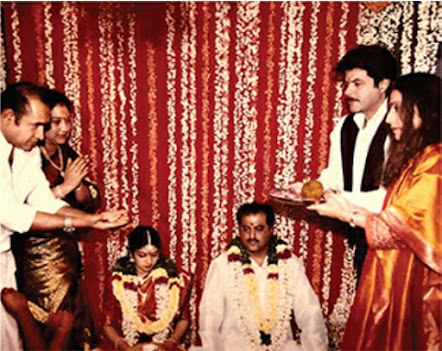 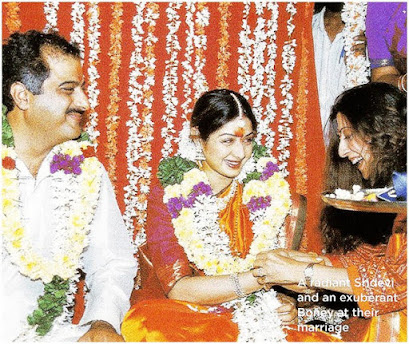 Boney Kapoor, "Sri and I had got married on June 2, 1996 but it became public in January 1997. We went through our own turmoil as we had our individual situations to face, she had her family, and I had mine (Boney was already married to Mona Kapoor, who passed away in 2012). But we had each other for comfort. We supported each other and dealt with it with a sense of calm. Sri conducted herself with dignity. In 1997 March, Janhvi was born and Khushi in 2000. Gradually, things settled..."
Above: Fan made video celebrating the 25th anniversary of Boney Kapoor and Sridevi.
Posted by Rama at June 02, 2021