38 years of Justice Chaudhury: Sridevi: A New Rage from the South! 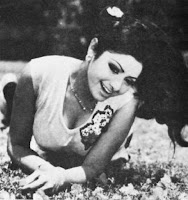 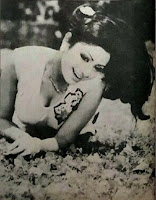 Released on 15 July 1983,  Justice Chaudhury was a blockbuster with young 20-year-old Sridevi. With co-star Jeetendra, it was part of a string of remakes that turned into box-office gold for the duo.
This feature of the "new rage from the south" showcases how Sridevi was making waves from the second she stepped into Hindi films. 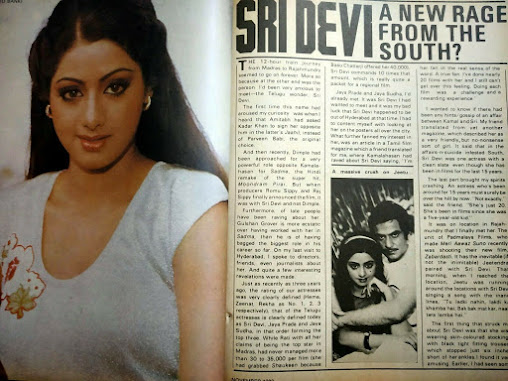 Sridevi: A New Rage from the South?

The 12-hour train journey from Madras to Rajahmundry seemed to go on forever. More so because at the other end was the person I'd been very anxious to meet - the Telugu wonder, Sridevi.
The first time this name had aroused my curiosity was when I heard that Amitabh had asked Kadar Khan to sign her opposite him in the latter's Jaahil, instead of Parveen Babi, the original choice.
And then recently, Dimple [Kapadia] had been approached for a very powerful role opposite Kamal Haasan for Sadma, the Hindi remake of the super hit, Moondram Pirai. But when producers Romu Sippy and Raj Sippy finally announced the film, it was with Sridevi and not Dimple.
Furthermore, of late, people have been raving about her. Gulshan Grover is more ecstatic over having worked with her in Sadma, than he is of having bagged the biggest role in his career so far. On my last visit to Hyderabad, I spoke to directors, friends, even journalist about her. And quite a few interesting revelations were mad.
Just as recently as three years ago, the rating of our actresses was very clearly defined (Hema, Zeenat, Rekha as No: 1, 2, 3 respectively), that of the Telugu actresses is clearly defined today as Sridevi, Jaya Prada and Jaya Sudha, in that order forming the top three. While Rati with all her claims of being the top star in Madras had never managed more than Rs. 30- to 35,000 per film (she had grabbed Shaukeen because Basu Chatterji offered her 40,000), Sridevi command 10 times that amount, which is really quite a packet for a regional film.
Jaya Prada and Jaya Sudha, I'd already met. It was Sridevi I had wanted to meet and it was my bad luck that Sridevi happened to be out of Hyderabad at that time. I had to content myself with looking at her on the poster all over the city. What further fanned my interest in her, was an article in a Tamil film magazine which a friend translated for me, where Kamal Haasan had raved about Sridevi saying, "I'm her fan in the real sense of the word. A true fan. I've done nearly 20 films with her and I still can't get over this feeling. Doing each film was a challenge and a rewarding experience."
"I wanted to know if there had been any hints/gossip of an affair between Kamal and Sri. My friend translated from yet another magazine which described her as a very friendly, but no-nonsense sort of girl. It said that in the affairs-n-suicide infested South, Sridevi was one actress with a clean slate even though she has been in films for the last 15 years.
The last part brought my spirits crashing. An actress who's been around for 15 years must surely be over the hill by now. "Not exactly," said the friend. "She's just 20. She's been in films since she was a five-year-old kid."
It was on location in Rajhmundry that I finally met her. The unit of Padmalaya Films, who made Meri Aawaz Suno recently was shooting their new film, Zabardasti. It has the inevitable (if not the inimitable) Jeetendra paired with Sridevi. That morning, when I reached the location Jeetu was running around the location with Sridevi singing a song with the inane lines, "Tu ladki nahin, ladki ka khamba hai, Bak bak mat kar, naam tera lamba hai."
The first thing that struck me about Sridevi was that she was wearing skin-coloured stockings with black tight fitting trousers which stopped just six inches short of her ankles. I found it very amusing, Earlier, I had seen some... "

* Zabardasti was the original title for the film Himmatwala!