High on Heroines: Anil Kapoor talks at length about Sridevi

Anil Kapoor sizes up the two Queen Bees in his life... Sridevi and Madhuri Dixit

He's irrepressible. Unfazed by the lows, excited by the prospect of the highs to come, Anil Kapoor sizes up two of his heroines for all seasons. Who they? Madhuri Dixit and Sridevi, of course.

Anil Kapoor, "Strangely enough, my first film with Sridevi too didn't take off. It was called Govinda! We even did a photo-session with J.P.Singhal at Film City. She was the No:1 star even then and I tried to impress her a lot.

I'd done a schedule of Joshilay but in that film she wasn't paired with me. So when I met her for Govinda, I tried to lay it on real thick. I tried to impress her with my film talk. And I suspect she was impressed.

I knew I’d look like a nerd opposite her – she was the ultimate showgirl, with her glamour. Oof, just dazzling. Right enough, when the photographs appeared, I looked like a sight with my thin legs and she looked like a Goddess. I think the only saving grace was my stubble which helped me to save face. Literally.

Then we signed Mr India together. Believe me, I felt like a spot boy. Everyone from the producer, director to the spot-boys were in love with her. They’d just take my close-ups and can my shots in two or three hours flat. And they’d labour lovingly over Sri.

I think every sequence was planned for her elaborately. A 300-feet shot like the Charlie Chaplin sequence took 30-35 days to can. If Madame had to go home early, her shots would be taken first. (Laughs) I was just a sidey. But all the attention lavished on her was well-deserved. She was the complete star. Mr India was sold on her name. The distributors thought it was a hot project because she was involved. 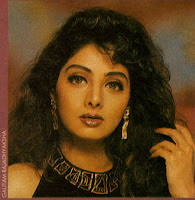 I was the first person to introduce her as Miss India at the Hope ’86 show. And that backfired on me. When the film was released, everyone jibed that it should have been called Miss India. (Guffaws) Maine apni hi pair par kulhadi mar li.

The late Raj Kapoor even chided me for promoting my heroine and not concentrating on my work.

I loved her in the scene where she buys the hungry kids things to eat. She performed that sooo well. And of course the jaadu of Kaate nahin katte still lingers. I think Saroj Khan became real big after that one number.

Sri did a lot of wrong films after Mr India. Maybe she was offered big money. She should have been more careful about her movies. And directors were always trying to make her do a Hawa Hawai or a Kaate nahin katte. But magic I think happens only once. Mr India remains the most entertaining film of my career.

I remembering we were once performing at the Eden Gardens in Calcutta and the crowds went wild. What a pataka! The other stars who were performing on stage would quickly finish their acts and wait to see her perform her number. When the other stars went on stage, they’d announce that Sridevi would perform next and they’d get more claps, just by announcing her name. I have never seen so much hysteria for any other actress.

Sri and I went on to become great friends. She’s friendly with my entire family. It was said that she was very reserved and didn’t talk at all. But I’m the sort who muscles in everywhere. I saw to it that she talked. A lot.

I know there’s a helluva lot of speculation about Boney’s friendship with her. They have been friends for 10 years. How come everyone is reading meaning into it only now?

Funnily enough Sri and her family liked me in Ram Avatar, a remake of Sangam. I advised her to work with Yash Chopra in Chandni and soon she became a part of Yashji’s family.

We did Lamhe together. I didn’t agree with her interpretation of the role in Lamhe. There was no need for her to be extra glamorous and wear coloured lenses while playing the Rajasthani belle. In any case, she was doing such sort of stuff in her other films. But her acting in the film was something else. Why should I complain? She even won the Filmfare award for it.

Some said that because of my personal rapport with her I got away with blue murder in Roop Ki Rani Choron Ka Raja, that we made her do all sorts of absurd things. That’s not true. We tried earnestly to make an entertainer. It’s sad it didn’t work.

I really hope Judaai and her other films do well. It’s time for magic again. She’s got the stuff that separates the women from the girls."

By Anil Kapoor.
May 1996
Filmfare
Pics of Sridevi by Gautam Rajadhyaksha. Portrait of Anil Kapoor by Suresh Natrajan. 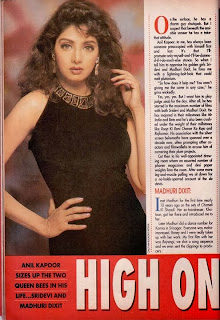 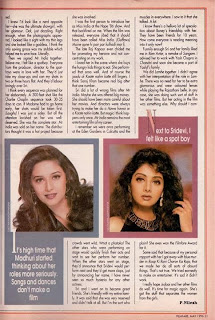