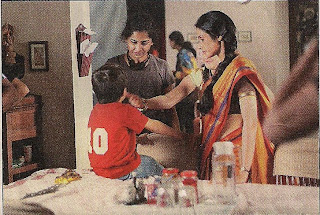 Excerpt from an interview from Times of India with director Gauri Shinde.

She wrote a story inspired by her spicemaker mother, and ended up as the woman who is bringing superstar Sridevi back on screen after 14 years. Meet Gauri Shinde

Sridevi was not only one of the most successful actors in the 1980s and '90s, but was also hailed for her comic timing. How did you manage to wean her from her sabbatical?
Gauri Shinde: Balki had gone to meet Boney Kapoor (Sridevi's husband) over something, and mentioned that I had a script for a film about a mother of two, who wants to learn English. Sridevi, who was there too, was interested to know more. That night, when Balki came home and told me this, I was stumped. I had considered a host of names for this role, but Sridevi, wasn't even on my mind, because she had been out of the scene for years. When I went over to narrate the script, she hung on every word. Through the narration, I saw her reactions and knew that this film was tailor-made for her.

What's she like on set?
Sridevi has film in her genes. A lot of technology that we use today like Sync Sound wasn't there 20 years ago, but she was very quick to grasp things. She's not stuck in the '80s. You know how women connect, right? It was most comfortable working with her. I imagined it would be frightening to work with a veteran, especially in my first film, but we got along really well. My main pressure was that I wanted to make a bloody good film so that people who have worked on it wouldn't be embarrassed by it. 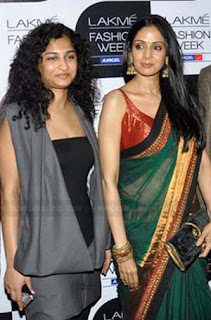 Is it a comedy? I'll say, it's not a morose film. It's about the journey of a woman who doesn't know English, and decides to learn the language. It is inspired by the story of my mother, Vaishali, an entrepreneur who made mixtures of spices and sold them to factories and supermarkets. Her only regret is that if she knew English, she may have been able to expand her business. She's retired, now.


More at http://timesofindia.indiatimes.com/entertainment/bollywood/news-interviews/Sridevi-isnt-stuck-in-the-80s-Gauri-Shinde/articleshow/12579205.cms
Posted by Rama at April 08, 2012