Tinsel Town: Over the Top 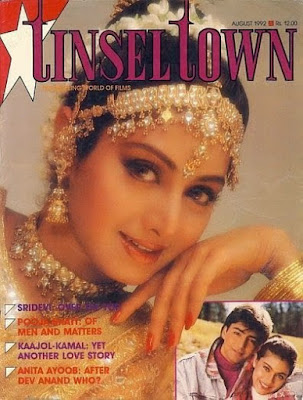 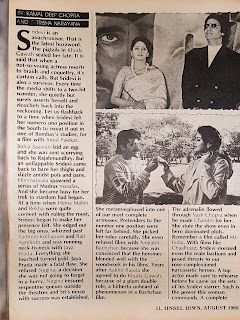 This year, we will be archiving every feature of Sridevi from the 80s and 90s for posterity, for fans young and old, new and life-long ones especially.

We will be preserving the living and loving memory of Sridevi till the end of our time.

Excerpt from the cover story of Tinsel Town, from back in 1992.  Sadly, the magazine closed its business years ago - and we used to love the glossy as it often featured gorgeous, original shots of Sridevi on the cover.

Sridevi is an anachronism. That is the latest buzzword. The pigtails in Khuda Gawah sealed her fate. It is said that when a snot-so-young actress resorts to braids and coquetry, it's curtain calls. But Sridevi is also a survivor. Every time the media shifts to a two-hit wonder, she quietly but surely asserts herself and ricochets back into the the reckoning. Let us flashback to a time when Sridevi left her numero uno position in the South to sweat it out in one of Bombay's studios, for a film with Amol Palekar.

Solvaa Saawan laid an egg and she was sent scurrying back to Rajahmundhry. But an unflappable Sridevi came back to bare her thighs and sizzle amidst pots and pans. Himmatwala spawned a series of Madras masalas. And she became busy, for her trek to stardom had begun. At a time when Hema Malini and Rekha were quite content with ruling the roost, Sridevi began to make her presence felt. She edged out the big ones, whizzed past Padmini Kolhapure and Rati Agnihotri and was running neck-to-neck with Jaya Prada. Everything she touched turned gold. Jaya Prada made a fatal flaw. She refused Nagina, a decision she was not going to forget in a hurry. Nagina ensured serpentine queues outside the theatres and Sri's nexus with success was established.

She metamorphosed into one of our most complete actresses. Pretenders to the number one position were left far behind. She picked her roles carefully. She even refused films with Amitabh Bachchan because she was convinced that the heroines blended well with the woodwork in his films. Years after Aakhri Raasta, she agreed to do Khuda Gawah because of a plum double role, a hitherto unheard of phenomenon in a Bachchan film.

The Adrenalin flowed through Yash Chopra when he made Chandni for her. She stole the show even in hero dominated plots. Remember a film called Mr India? With films like Chaalbaaz, Sridevi stormed even the male bastions and posed threats to our rose-complexioned narcissistic heroes. A top actor made sure to rehearse before he came on the sets of his Sridevi starrer. Such is the power this woman commands. A complete actress...