Dimple Kapadia, "Sridevi was too good" 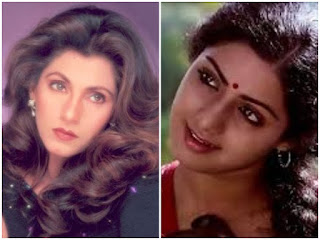 Today, June 8, is Dimple Kapadia's birthday - this quote about Sridevi from Dimple is lovely - not as funny as the one she had about Rajesh Khanna!

Dimple Kapadia, "There is no role that I look forward to. I have done enough and I am not dissatisfied with the body of work that I have done. Sadma (1983) was one film I was supposed to do, but unfortunately Sridevi did it. That remains one role I wanted to do but after seeing Sridevi, that desire died. She was too good."

When asked about who her favourite actress is, Dimple Kapadia said in the same feature, "The best heroine around today is, unquestionably Sridevi. She's miles ahead of the rest and I am a great admirer of her. If you ask me who my favourite is, the answer would be simple, Sridevi. She is number one. Even you have said that."

As wonderful an actress Dimple is/was and so famously beautiful (that mane of hair is beyond compare), the one thing we loved about Dimple Kapadia unfiltered uncensored interviews. She was so much fun to read. No PC BS, just as truthful as she could humanly be.